Between Harrogate and Knaresborough, the River Nidd has cut a 200 ft deep gorge today has developed into a great Harrogate Walks area. There are over 4,000 years of human activity in this area and is a local conservation site where the valley woodlands, paths are a magnet for walkers, cyclists and anglers with 20 species of mammals and 120 resident or migratory birds.

The Nidd Gorge his area is a local conservation site where the woodland, dating back to at least the 1600s consists of 5 named woods: Bilton Banks, Coalpit Wood, Gates Wood, Scotton Banks and Spring Wood, all teaming with hundreds of wildflowers.

The 114 acre (46-hectare) woodland site is located in a steep-sided valley around 2km (1.5 miles) west of Knaresborough. The river Nidd runs east to west through the gorge, dividing the woodland into two equal parts.

Walk through these ancient, broadleaf woods and along the banks of the meandering River Nidd in the sheltered depths of the valley, or climb higher for magnificent views towards the historic spa towns of Knaresborough and Harrogate.

There are figures placed throughout the woods as well as the face of Guy Fawkes, who grew up nearby, carved into a tree. 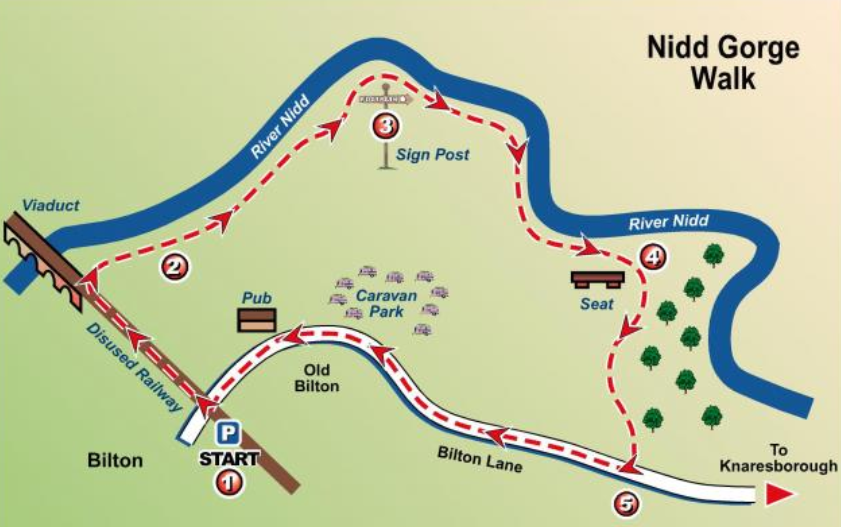 There is a Harrogate Walks Nidd Gorge information board near the main entrance showing the wood’s extensive footpath network. From the car park, a pedestrian gate leads to a well-surfaced forest track with some gentle inclines. The track runs through the woodland for around 3/4 of a mile (1.1km ) to the River Nidd and connects with other paths which link with a network leading to Harrogate, Knaresborough and surrounding areas.

The Harrogate Walks Nidd Gorge site is steep in places and some paths may include steps and boardwalks, and it can be slippery in wet weather.

There is a pedestrian bridge across the river just off the forest track, about 300 metres from the car park. The walk passes an attractive weir/mill setting at Scotton Mill a former flax mill, dating from 1798 and now a private house. The calls at the Victorian Nidd Gorge Viaduct (also known as the Bilton Viaduct) which is 104 ft high, has seven arches. It was completed in 1848 and carried the North East Railway Line between Leeds and Thirsk. It closed in 1969.

At Old Bilton, you will find the Gardeners Arms pub. This is an unspoiled Sam Smith’s pub with a large beer garden. It has interesting features like wainscotting, stone flags, stone fireplaces and four small rooms including those names include “Piggery” and “Wrinklies Bar”. Being a Sam Smith’s pub the drinks are remarkably good value, including the Old Brewery Bitter and Pure Brewed Organic Lager. We’re informed that no food is available, but customers may consume their own sandwiches in the beer garden…….better ask first!!

This low-key, peaceful caravan park, leisure home and campsite and is surrounded by safe cycle and walking paths. Ripley and its castle, it’s famous ice cream are only a short distance by bike or on foot, likewise, the delightful market town of Knaresborough with its picturesque viaduct and rowing boats is easily reached, and well worth the journey.

To connect your walk to other Woodland Trust properties at Bilton Beck and Rudding Bottoms, follow the riverside path to the west (upstream) for around 1 mile (1.5km) from the bridge.

15 miles of Harrogate Walks footpaths now connect the Nidderdale Greenway (4.2 miles, 6.7 kilometres) which runs from a starting point at Harrogate Railway Station to Ripley Castle. 2 miles from Harrogate you will enjoy the peace and quiet that comes with a countryside setting. Surrounded with safe cycle and walking paths you may not even need to use the car whilst you are there. Ripley and its castle, it’s famous ice cream is only a short distance by bike or on foot, likewise, the pretty market town of Knaresborough is easily reached and well worthy of planning a visit. Whether you are attending the plethora of world heritage sites, villages and dramatic scenery or taking advantage of the walking and cycle routes.

The Beryl Burton cycleway is a traffic-free cycle and walking route from Bilton Hall Drive to the River Nidd at High Bridge, Knaresborough. It runs along Bilton Lane which is a private road, with traffic limited to access for residents, and a barrier part-way along to prevent other through traffic. As a result, it’s a great place to walk, gently jog, run, or cycle.